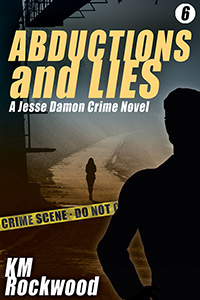 Women have been disappearing, snatched off the streets in the early morning hours. One body has been found. The pressure is on to find the perpetrator and put a stop to this.

It's bad enough that Jesse Damon is paroled on a murder conviction, and the police take a serious look at him whenever there's trouble in the neighborhood. But when two girls report an attempted carjacking at three in the morning, and Jesse is picked up walking on the street a few blocks away, things go downhill fast.

One of the girls identifies him as the person responsible.

The detective in charge of the case is sure he has it wrapped up. No one checks into Jesse's alibis for most of the abductions, or looks for the true culprit.

Jesse has one advantage over the cops—he knows he didn't do it. And if the real abductor isn't found soon, that positive ID is going to land him back in prison...

The male cop got out and opened the door for me. "Get out. Stand still and face forward."

Climbing out of the back seat of a car with hands cuffed behind is awkward.

He reached in and grabbed my arm, pulling me out. I managed to get one of my feet out the door and under me before I fell. He held onto my arm again. Tightly.

I caught a quick glimpse of a car with its front crumbled against a utility pole. The pole was broken off near the base and lay across the car's roof. Wires draped onto the wet pavement.

Probably why we'd lost power at work. They'd have to shut off the whole neighborhood to get that fixed.

One of the vehicles sitting crosswise in the intersection was a utility truck. Still, it was going to be a while before they could get the power back on.

Rain dripped from my wet hair into my eyes. I shook my head.

The cop's grip on my arm tightened more. "Stand still."

A bright flashlight shone straight into my face. Blinking, I started to turn away from the glare.

Another squeeze on my arm. I'd have bruises there. "Look straight ahead."

I had to close my eyes.

A murmur of voices came from near the crashed car, nearly drowned out by the increasing drumming of the rain.

To the side, someone said, "He can't see you with the light in his eyes. Don't worry."

I was pretty sure they weren't talking to me.

My stomach churned. What was going on here?

A strangled female voice said, "Yes! That's him!" and ended in a sob.