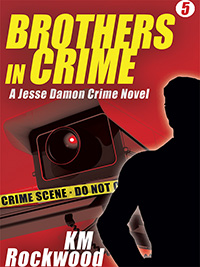 After nearly twenty years in prison, Jesse Damon is just trying to make it on parole. But nothing comes easy. The cops say they have a video of him breaking into an ATM. He's in trouble at work over a toxic chemical spill. A runaway wife shows up on his doorstep, dead broke and needing somewhere to stay. And his sometimes-girlfriend Kelly seems to have met someone new. Sydney. At an AA meeting, of all places. When Jesse goes to Sydney's office and finds his dead body, he's pretty sure the guy has been murdered. And that he will be the prime suspect.

"Jesse, you made the front page of the paper again."

"Yeah?" I paused next to the timeclock, card in hand, ready to punch out. This couldn't be a good thing.

John, the foreman on my midnight-to-eight shift, held a folded copy of the Rothsburg Register, the local newspaper, in his hand. Bucky, dayshift foreman, stood next to him, a nasty smirk on his face.

"The picture looks like a mug shot. A recent one," John said. "You look kind of rough. Need a shave." He unfolded the paper.

"You may as well punch out," Bucky said to me. "Nobody's gonna pay you any overtime."

I took a deep breath and slammed my timecard into the slot with more force than necessary. The mechanism in the clock gave a "clunk," snagging the card and holding on.

That's what I got for being too rough with it. How was I going to tell John that I'd messed up the timeclock?

The clock made a rasping, metal-on-metal noise. I tugged on the card and it came free. They hadn't seemed to notice. I put the card in its slot in the rack and decided not to say anything.

Shoving the newspaper toward me, John said, "It was written by that woman reporter who wrote about you before. Carissa Whoever. The headline's kind of snarky, but the article itself isn't bad."

"Yeah." I knew who that was. Carissa Daniles was trying to build a name for herself as an investigative reporter, and she wasn't one to let truth or ethics stand in the way of a good story. Rothsburg was a small, depressed city that a lot of heavy industry had left behind. Not a whole lot of things to investigate.

I took the paper. The headline read, "Paroled Murderer Makes a Killing."

Just like Carissa. She'd think that was clever and amusing.

It might be clever, but I sure didn't find it amusing.

The picture made me wince. Any doubt that it might be a mug shot was dispelled by the fact that I was holding a plaque with a commitment number on it. On the wall behind me were marks to show height. It had been taken a few weeks ago when I'd gotten locked up. Not a terrible picture for a mug shot, but my face was bruised up a bit and I looked moderately deranged. I did need a shave and I'd lost my hair tie, so my wiry brown hair stuck out in a bush around my head.