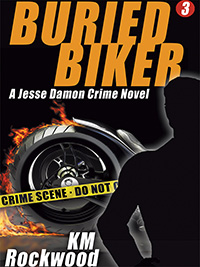 The cops have decided Jesse wasn't the one who raped sometimes-girlfriend Kelly. But can he convince Kelly and her father's biker buddies that he had nothing to do with it? And since he's already on parole on a murder conviction, he's the first obvious suspect when the real rapist turns up dead. And how about Kelly? Will she ever be "all right" again?

Montgomery asked, "I said, when'd you see her last?"

"Thursday night? I thought you worked the early morning hours."

"Yeah." I'd caught a few hours of sleep, and it seemed a lot longer ago than that. It is easy to get all mixed up when they throw questions around like that. Of course, that was one of the main reasons they kept doing it. They'd twist the words against me and throw them back at me. I'd say something stupid and contradictory, giving them more ammunition.

"Haven't seen her since you got off from work?"

Why indeed? But I said, "Her dad just got out of prison. She let him use her place on his home plan. I'm on parole."

"I'm not supposed to associate with convicted felons. So I can't go over to her place when he's around."

"Why don't you have her over here at your place?"

Belkins said, "Because it's a rat hole and you don't want her over here?"

He was right. It was a rat hole, but that wasn't the main reason. "I only got the one room. She's got two kids. Not a good place to bring them."

Montgomery took over again. "Where were you this afternoon, Jesse?"

"Washed my clothes at the Laundromat. Then I went to the library just before it closed, I for a few books. Went out a little later to get something to eat off the McDonald's dollar menu. That's where I'm coming from now."

Belkins snorted. "The library? I thought you had to be able to read to go to the library."

Montgomery chuckled. "I don't think that's entirely true, from some of the people I've seen hanging around in there. But Jesse's not stupid. He can read."

"So you haven't seen Kelly all day?" Belkins asked.

"Not since we got off work."

"So it wasn't you beat the crap out of her?"