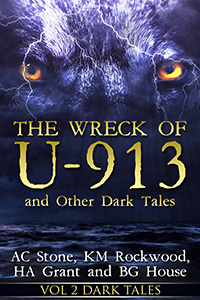 Walk beside everyday people who take an unexpected look into the shadows in these five tales with a supernatural twist.

The Wreck of U-913 Deep-sea divers explore a sunken Nazi submarine, but they find more than a lost treasure. Can they retrieve the gold and return to the surface, or will the mysterious lights they encounter in the abyss overwhelm them?

Escape from Hell After a prisoner spends a few weeks in solitary confinement, his decrepit cell becomes its own hell. Time and sanity slip away. He begins to wonder if creatures from the real hell lurk in the shadows, waiting for their moment to escape.

Buffalo Blonde A lonely car salesman gets caught up in the chase of a beautiful woman and finds himself in a sticky situation.

The Secret Life of Sam Dunlap Sam's night ends in a brawl. It's a dog eat dog world.

The Bad Thing When ten year old Margaret is forced to spend the summer with a cousin who torments her with taunts and scissors, reality slips sideways until the unthinkable happens.