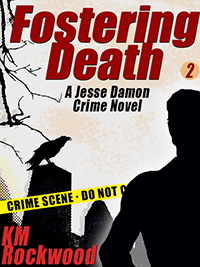 Jesse Damon has spent most of the last twenty years in prison on a murder conviction. Now paroled, he's trying to beat the odds and stay out of prison with a pair of overactive cops watching him for mistakes. He's got a one-room apartment, a job working the overnight shift at a factory, and some-times girlfriend Kelly. If he can just stay out of trouble, he may even be able to join the union.

But when he pays his last respects to Mrs. Coleman, his foster mother, he finds out that her death is being investigated as a homicide. And he's the prime suspect.

Jesse's life is getting complicated fast, what with a group of religious fanatics in saffron robes opening a tabernacle in the abandoned pizza parlor over his apartment, problems at work, and Kelly's custody battle with her ex. It's a lot to deal with while he tries to find out who really killed Mrs. Coleman and get the cops off his back.

Trying to be as invisible as possible, I eased myself back among the flower arrangements on easels, choking on the cloying scent of chrysanthemums. I rubbed my freshly shaven face with my rough hand. Maybe I shouldn't have come here.

"The mortician did a good job," the lady said. "She could be asleep. Quite natural."

Mr. Coleman glanced into the coffin, then quickly looked away.

"What are you doing here?" he asked, his reedy voice rising.

Other conversations ceased as all eyes turned toward me.

I'd been right. I shouldn't have come.

He looked me over, head to foot. "And you couldn't even dress properly."

Inwardly, I winced. I clutched my jacket to my chest, folded so its worn black lining showed instead of the garish red plaid. I'd worn my darkest flannel shirt and clean jeans. The work boots were the only footwear I owned.

"When you wrote that letter to her from prison, didn't I write back to tell you she never wanted to hear from you again?"

"Yes, sir. I never tried to write her again."

"What made you think you'd be welcome here?"

I had been among the dozens of foster children who'd passed through the Colemans' house over the years. Mrs. Coleman was the closest thing to a mother I'd ever known. I said, "I'm sorry, sir. I didn't mean no disrespect. She meant a lot to me."

His quavering voice grew even louder. "I find that hard to believe. You were a huge disappointment to her. She looked on you almost as her own, keeping you for all those years. She thought she saw something in you. But she was wrong, wasn't she?"

I had no answer for that. I inched toward the door.

"She cried after she read about you in the newspaper. Did you know that?"

"Sorry doesn't quite cut it, does it?" Fury blazed in his pale eyes. "Since when do they let killers out of prison, anyhow?"

Everyone was staring at me. I didn't think this was a good time to start explaining about parole.

Two burly men in somber suits were bearing down on me. I turned and strode out of the viewing room to the entry hall.

As I skirted a stand by the door, the lady standing next to it chirped, "Don't forget to sign the visitor's book!" and tried to hand me a slim gold pen.

I ignored her and kept on going, out the front door and down the granite steps, which were getting slippery from the falling sleet...

"Well, look who's here, Detective Montgomery. Jesse Damon," a voice said behind me.

"Interesting indeed, Detective Belkins. I have to admit I hadn't expected to see him here," came the answer.