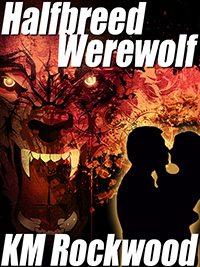 Kurt was raised by his father's werewolf pack after his human mother abandoned him. Or had she been eaten? When he returns to the area from which she came, seeking answers, he does not anticipate falling in love with a woman. But what can he possibly offer her, especially when he realizes she is engaged to an heir of the wealthy family that now occupies the land?

The wolf crouched in the brush behind the overlook. A chill breeze ruffled his mottled gray fur as moonlight washed over the pavement, damp from an earlier drizzle, and illuminated the car parked by the edge of the lookout. The wolf's keen yellow eyes focused on the couple in the flashy sports coupe.

They sat close together, but perhaps they had no choice. Even on all-fours, he stood higher than its roof. And nose to tail, he was as long as the car.

When the wolf had first come upon the car, the he hadn't recognized it. But after watching for a while, he realized it was the vintage Austin Healey that was kept in one of the garages at the large estate in the valley. The car belonged to Rupert, son of the family that owned the estate.He raised his nose to catch the wind, picking up the hot scent of a deer in the woods beside the car. Saliva dripped from his jaws as the anticipation of the taste of hot blood, deer or human, crowded out other thoughts. His stomach growled. The night was half gone, and he hadn't eaten nor had he found a female with whom to mate.

Swiping his tongue over his sharp teeth, the wolf forced himself to think beyond his carnal urges. He was no ordinary wolf. He was not even an ordinary werewolf, but a half-breed - his human mother had disappeared from his life when he was not much more than a cub. Even in this animal's body, his human side would not let him abandon himself entirely to wolfish desires.

He reminded himself that his name was Kurt, Kurt Vilkas, and by choice, he spent most of his life as a human. He could not prevent the physical transformation brought on by the full moon, but he retained some capacity to think and reason. He just needed to force himself to use it.

The passenger door of the car opened with a sharp click. As Kurt watched, a woman stepped out. His heart beat faster. Daphne. She was one of two full-time nannies at the estate where the human Kurt had recently been hired as groundskeeper and stable hand.

Kurt admired her from afar - lusted after her, if he admitted the truth - but he had only spoken a few words to her, when she brought her young charges to fetch their ponies from the stable. Her job was professional. She lived and worked in the house. He was a laborer, with a room over the stables.

And if that weren't enough, she was now engaged to Rupert, son of the family that owned the estate. How could she ever be interested in someone like him?

As he watched, the car backed, switched gears and shot forward down the road, missing Daphne by inches.

She stood in the roadway, staring after it, then glanced around at the surrounding woods.

Kurt held his breath and didn't move, hoping her human eyes, not suited to seeing in the darkness, couldn't see him.