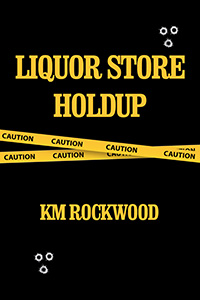 The gun was heavy in my jacket pocket.

I'd paid $100 for it. That put me down to less than $5 cash. And cash was the only way I ever saw money. I suspected I'd been ripped off, but once I decided my plan was a go, I needed it.

Somebody had been holding up convenience stores in the neighborhood in the last few weeks. He hadn't openly displayed a gun. He would keep his hand in his pocket and point toward the clerk. Maybe he had a gun, or maybe he didn't. None of the clerks wanted to find out.

How much could you get from robbing a convenience store? I figured not that much. I planned to do a liquor store. A lot more cash on hand. And, probably, a clerk who wouldn't be intimidated quite so easily. I'd have to show the gun.

Maybe I could sell it later and recoup my money. But that had its own set of problems. Suppose someone was shot with it later and it was traced back to me? Best bet was to dump it down a storm drain later tonight, when I was done with it.

The bitter wind clawed at me as I turned the corner onto Second Street. Streetlights cast a harsh glare on the wet asphalt. I pulled the watch cap down low over my eyebrows and wound the ridiculous scarf around my neck and over my mouth and chin.

My gloves weren't heavy enough to keep out the cold, but I didn't want ones that would interfere with handling the gun. And since I didn't want my fingerprints on it, or anywhere in the liquor store, I'd worn them ever since I'd picked up the gun.

I stepped into the sheltered entry to a closed store, standing between the plate glass windows. Both to get out of the wind and to build up my courage.

This was going to be a one-time deal for me. I had just landed a decent job in a small machine shop, assembling casings for controls.. If I could make it to my first payday, we'd make out all right.

But that first payday was three weeks away. The rent was due. We didn't have any food. My car, without which I couldn't get to the job, needed a new fuel pump. Audrey, my wife, had to take off from work with a bad back. And Molly, my little girl, had bronchitis. Her medicine, which I hadn't bought yet, was outrageously expensive. The doctor wasn't happy about not being paid right away, but he'd wait. They wouldn't give me the medicine, though, if I couldn't pay for it up front.

Five hundred bucks would do it nicely. The liquor store should have that much on hand, easy.