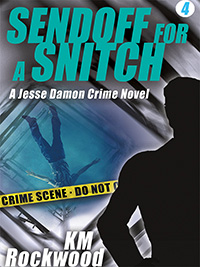 After years in prison on a murder conviction, Jesse's trying to make it on the street, but nothing comes easy. He's always broke and the police figure he's a natural suspect for almost anything, even without Aaron trying to set him up.

Jesse can't catch a break. His forklift at work is wrecked. His sometimes-girlfriend is furious with him. His basement apartment has a few feet of water in it. And it's still raining.

Wait until his parole officer finds out he's been caught driving Aaron's pickup truck. Without a license. That alone might violate his parole and send him back to prison. Then when Aaron's body is found floating in the flooded stairwell of his apartment, prison looks like a forgone conclusion, unless Jesse can manage to steer the police in another direction.

I was tackled and thrown to the ground face down. Since I'd been anticipating it, I was able to fall away from the truck and avoid crashing my head into the open door. But my nose and chin had hit the pavement pretty hard. And I bit my tongue.

Someone slammed a knee down on my neck, and my legs were pinned to the ground. My hands were pulled roughly behind my back. I felt the familiar clamp of too-tight handcuffs on my wrists. I tried to relax my muscles and let them be manipulated, but they wouldn't loosen up. Something warm and wet mingled with the damp gravel around my face. I stuck the tip of my tongue out and tasted it. Blood.

Strong hands encased in plastic gloves hauled me to my feet. Someone frisked me, feeling my pockets, under my jacket, between my legs. All they found was my keychain. They already had my wallet.

I blinked, trying to get the dirt out of my eyes. Everything was blurry.

"Should we put him in a car?" someone asked.

I couldn't see well enough to know who was talking. Not that it mattered.

"Here comes the sergeant," someone else answered. "Let's ask him what he wants to do."

I could feel my tongue, swollen and sticky from blood. I leaned my head forward so the blood would drip down my chin instead of filling my mouth. I knew how sick swallowing blood could make a person.

My arms would have bruises where I was being held. Out of the corner of my eye, I saw a new pair of boots approaching.

"What do we have here?" the person attached to the boots asked.

I kept my gaze on the ground and couldn't see who was talking. "Stolen truck, Sarge. Driven by a felon on parole. He don't have no license."