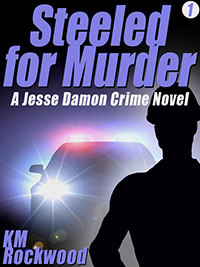 After nearly twenty years in prison on a murder conviction, Jesse Damon has been released, a home detention monitor strapped to his ankle. Determined to make it and mindful of his parole restrictions, he struggles with life outside prison. He finds a basement apartment, a job on the overnight shift at a steel fabrication plant and a few people who treat him like anybody else. Especially Kelly, a woman who works in the shipping department. He seems to be making it. Until Mitch, forklift driver on the shift, is found murdered in the warehouse. The investigating detective doesn't want to look any further than Jesse to close the case. He's not fussy about the methods he uses to gather evidence. If Jesse isn't going down for this, he will have to be the one to figure out who killed Mitch and why.

Taking one of my wrists in his iron grip, he brought my hand behind me, turned the palm outward and snapped on handcuffs. Tighter than necessary. He did the same to my other hand.

"OK, Detective Belkins." He stepped back.

Detective Belkins eased off the desk and walked around me, eyeing me up and down. "Anything you want to tell us?"

"Yes, sir." I continued to look down at the desk.

"No, sir." What had I done that might violate my parole? Nothing I could think of.

"What was the charge?"

He knew. He just wanted to hear me say it. "Murder. Possession of a handgun during the commission of a felony. Conspiracy."

"And you pled guilty?"

"Alford plea." Copping to an Alford plea - not admitting guilt but agreeing that the state had enough evidence to convict me - had been a problem from the beginning. Anyone who had any say in my future, like counselors and parole board members, wanted to hear me express remorse. Much harder to do when the plea itself denies guilt in the first place.

I couldn't think of any reasonable response to that. So I kept quiet.

"Those charges were dropped," I said. "Part of the plea bargain."

"Possession of controlled dangerous substance? With intent to distribute?"

"Dropped." The convictions would show up on any kind of check. But he knew all my original charges; he'd done his homework. Why had he bothered?

"Part of the plea bargain, too, I suppose?" he said.

I nodded. No point commenting on that.

"Been reporting to your parole officer?" he asked, rubbing his nose with a thick finger.

He glanced down at my ankle, where the black box made a slight bulge in the leg of my jeans. "Following the terms of home detention?"

"Getting along with your co-workers?" He came closer. I could smell his sour breath.

"How about one Mitchell Robinson?"

"The forklift driver? He thought I was looking at his wife, but I wasn't." Jeez. What had Mitch told them?

"He threaten to call your parole officer?"

"Must have worried you. Don't want to go back to prison where you belong, do you?" He shook his head. "They should never parole these killers."

He swung back to face me. "You know your Miranda rights."

He wasn't even going to read them to me. I wouldn't complain; I was a parolee and no one would listen anyhow.

"You sure you got nothing to tell me?" Det. Belkins tapped hard me on the chest. I would have a bruise there. I ignored it.

He smiled. A mean smirk. "Jesse Damon, you're under arrest for the murder of Mitchell Robinson."