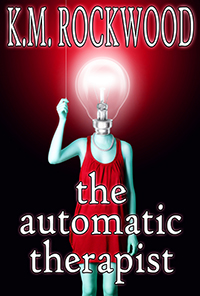 Brooks' boss Jake has disappeared, leaving him and Miriam, the boss's wife, struggling to keep the business going until they can figure out what's happened. Miriam thinks he's mad at them and will be back. Meanwhile, Brooks has to deliver the robots that Jake has promised customers and handle any service problems. Friday, after business hours, he is summoned to the office of Dr. Watkins, their best customer, who is having a problem with one of his automated therapy robots.